Chase Matheson - July 22, 2022
Many of you remember the "Hostile takeover" of the Benton County Election Commission. For readers who do not there is a recap below.
If you do remember then feel free to skip straight to the list.
Remember, if you are experiencing election issues in your area please email me at Tips@PatriotPunkNetwork.com 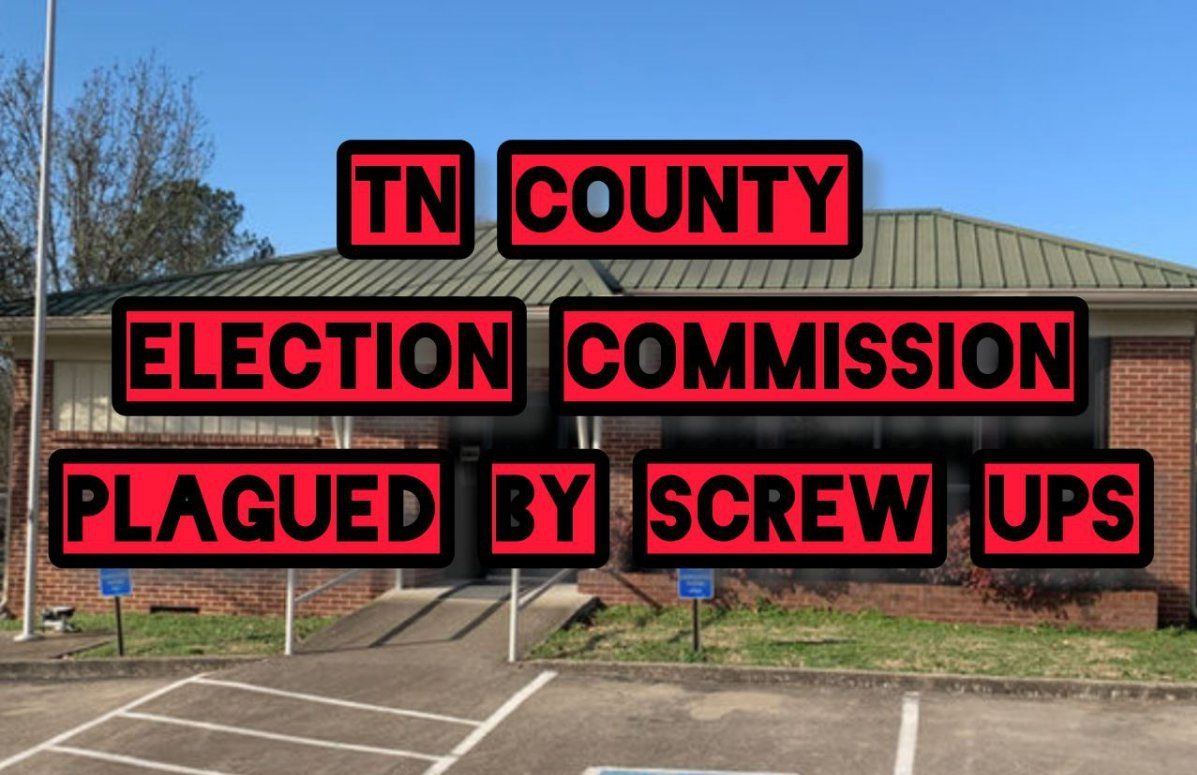 The State Election Commission, which is comprised of 7 members and has final say on who becomes your local Election Commissioners, decided to replace every member of the Benton County Election Commission early last year. According to Democrats and Republicans who were serving at the time, this was done to remove the 13-year Administrator of Elections Mark Ward. You see, the State Election Commission has the power to chose local board members, but not necessarily the power to remove the local Administrator--at least not without the final say of the local commission.
Since the state apparently wanted rid of Mr. Ward, and the board didn't, they replaced the entire 5-member local board with people who they apparently felt WOULD remove the longtime administrator. In July of 2021 the State accomplished their goal and the entire Benton County Election Commission AND the Administrator had been replaced by 6 new people. These individuals had a combined total of zero years experience. So what actually came of the Hostile Takeover? Well, quite a lot has happened since. I have decided to list as many of the shady and/or unlawful actions as possible that have occurred between July 2021 and today. Read the list of screw-ups below and then ask yourself--what the hell is going on in the Benton County Election office?

1. Violating the 1st Amendment by Silencing Critics in Public Forums.

After the hostile takeover dozens of citizens began getting involved by going to meetings. Many who couldn't attend commented on their official Facebook page. Unfortunately, this Public Forum was not open to those who chose to question or criticize the office. Comments of this variety would be deleted from the page, while positive comments were allowed to remain. This page, at last count, had over 1,000 followers. For a County of roughtly 15,000 people, that is a significant following. 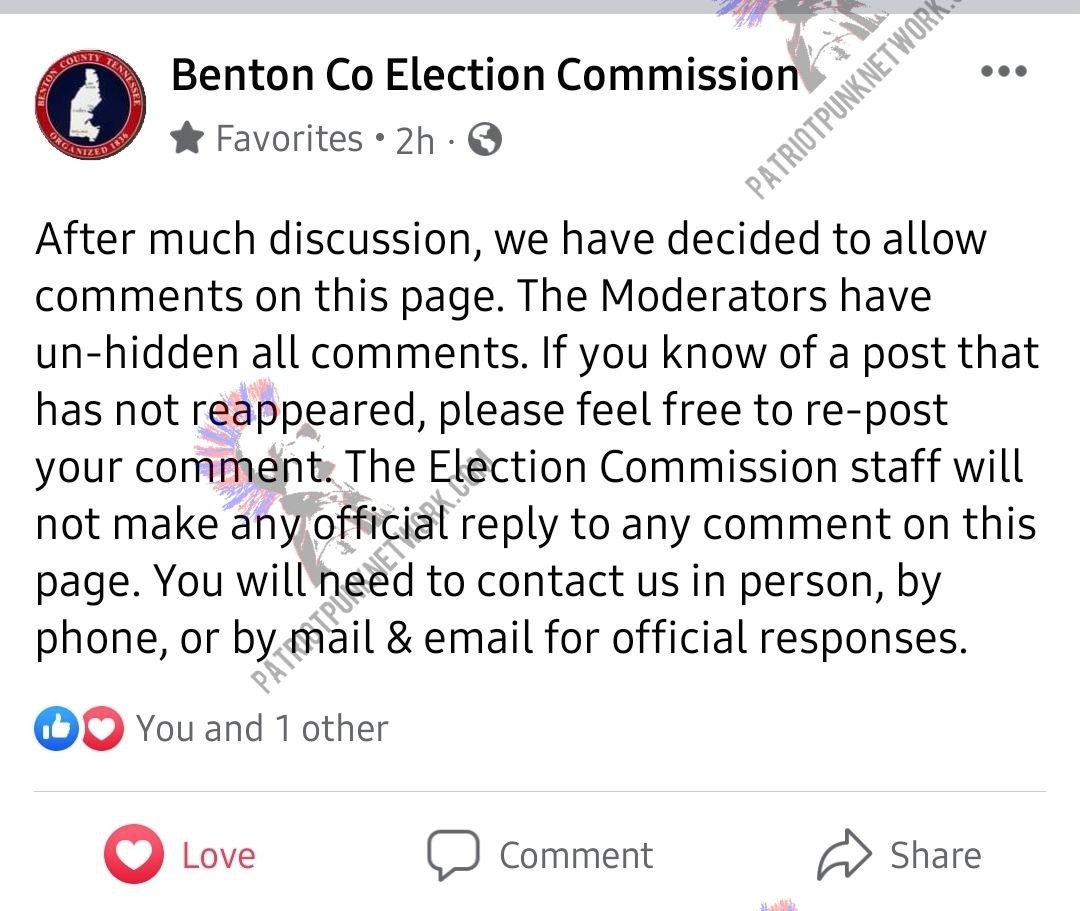 screenshot of bcec admitting they had deleted/hidden comments

Someone (or a group of "someone's"), made the decision to delete the entire Benton County Election Commission Facebook page when they found out they couldn't censor comments they didn't like*. This decision was likely made in violation of the Sunshine Law. Prior to this decision the commission had made it clear that the public could get all the information they needed from this Facebook page, hence why they had over 1,000 followers. The decision to delete the Facebook page also forced all livestream meetings to the YouTube channel, which at the time of this publication has 12 subscribers. Talk about making a change in the interest of more transparency! (sarcasm, obviously)
*A Facebook page still exists, but this is an old page that was abandoned some before the Hostile Takeover. 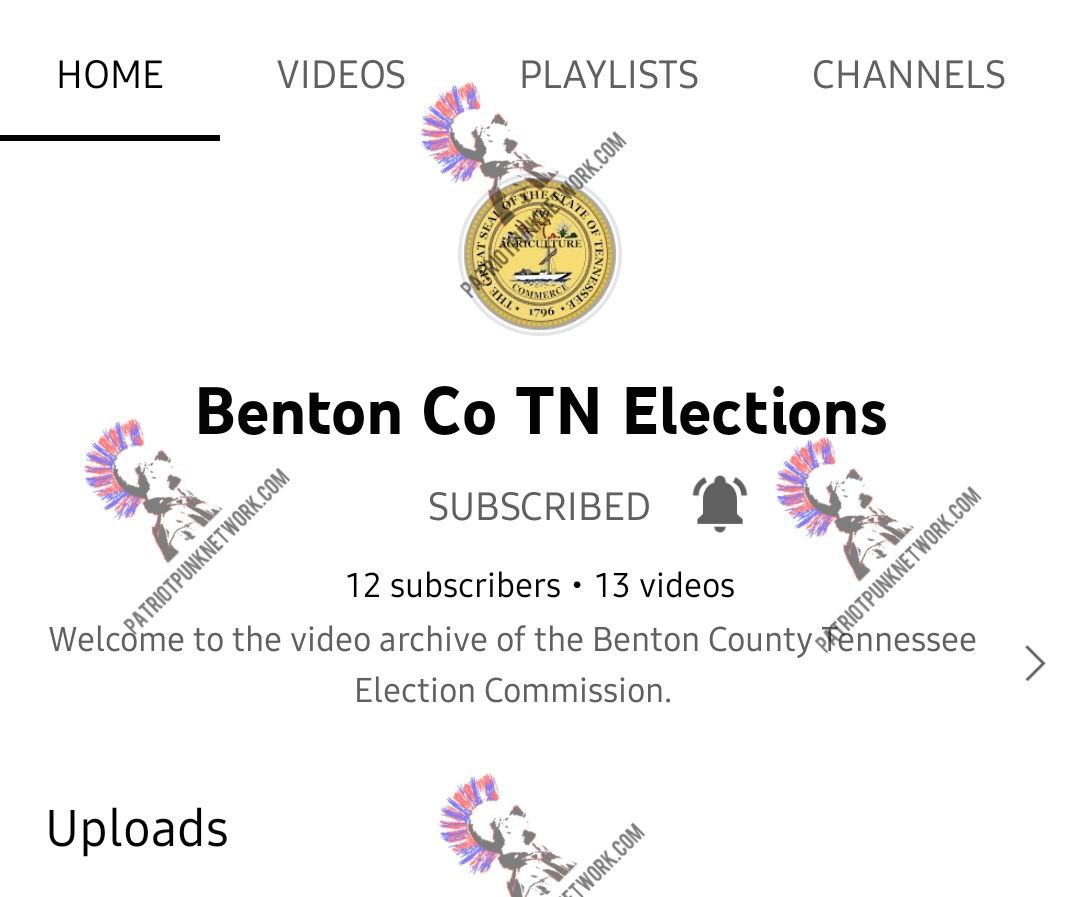 3. Three Women were Assaulted in September 2021

4. Stopped Publishing Meeting Dates and Times in the Local Paper

Unlike a school board or a county commission, Election Commissions do not have a need to meet every month. Depending on the year, they could meet as few as 4 or 5 times for a "meeting". Due to the Tennessee Open Meetings Act, these meetings have to be announced to the public. Traditionally this was done via the local newspaper. This tradition has now ended and the "word on the streets" is that it was to save a few dollars on the cost of the ads. Now the meeting notices are posted on bulletin board inside a select few government offices, and on the new website which virtually no one looks at regularly. Once again, the epitome of transparency. 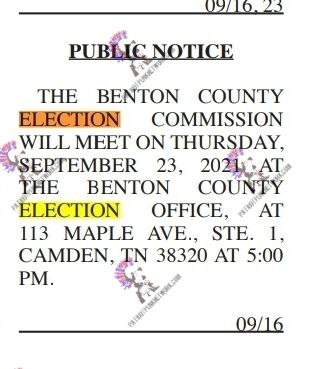 5. One Commissioner Attempted to Intimidate or Harass a Citizen

To be fair, I am the citizen the messages were sent to. One of the Election Commissioners sent strange messages to me between the hours of 1130pm and 2am. They did this 3 nights in a row and never explained why. The messages were almost certainly meant to intimidate or annoy me, similar to a hang-up call. This attempt at intimidation backfired and I brought the screenshots to the next public meeting on a giant poster asking "why?". The police showed up, as did a local State Representative. The Election Commissioner was clearly shocked, and afterwards left in a hurry, only to make a false accusations to the police department involving one of the victims in the assault and a candidate for school board, Cristy Baldwin. 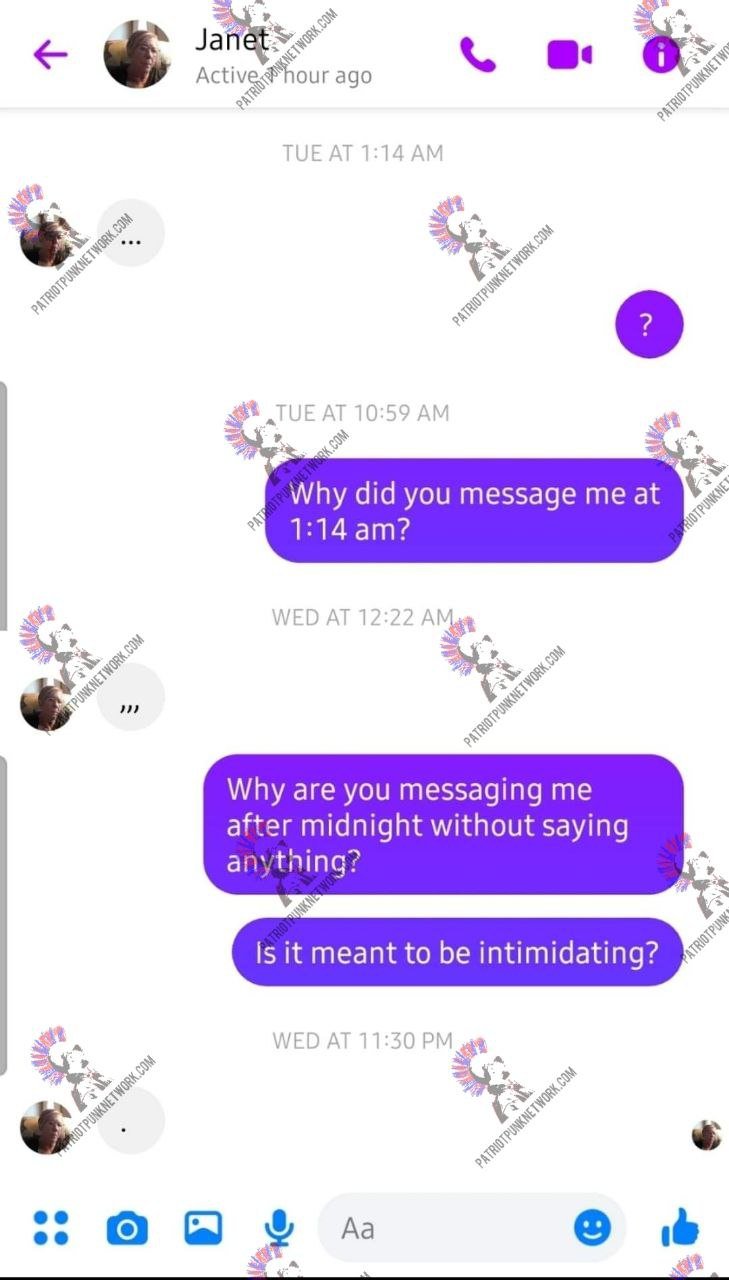 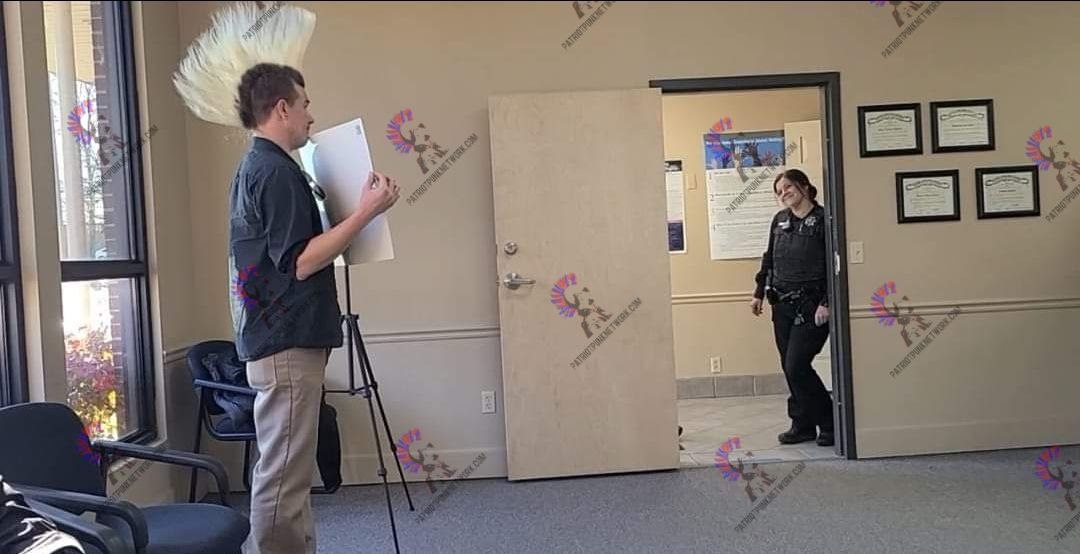 Patriot Punk holding the screenshots on a poster

6. Same Commissioner made False Accusations Against School Board Candidate

Immediately after the meeting where I brought the screenshots on a poster board, that same commissioner called the Camden Police accusing my friend and school board candidate Cristy Baldwin of following her home from the meeting. The accusation went so far as to say she pulled into this commissioner's driveway and refused to leave until the police were called. It has been alleged she has video evidence of this, but she refuses to show it to anyone. This is because this is 100% false. That day I followed Ms. Baldwin from the Election Commission meeting straight to the local Chinese buffet. It was while we were sitting down eating lunch that the police came in and told us what accusations had been made Geolocation tracking data can confirm this.
Video of police alerting candidate Baldwin of the false report made against her

7. Screwed Up when handing out Candidate Petitions for the 2022 Elections

Whenever a candidate runs for office they have to pick up a petition from the Election Office. You are not allowed to pick up petitions until a specific date before the election, and based on whether or not the race has a Primary, there are different deadlines for different reasons. This is why it is important to know all the rules. Well, when a number of candidates came to "pull" their petitions, many were handed out with the wrong party affiliation on them. Others were handed out prior to the time they were meant to be handed out. Both of these issues required some candidates to get their petitions re-filled out. One candidate, who claims to have turned everything in the first time, missed the deadline is now running as a write in Candidate. It is possible this could be a contributing factor to Number 11.

8. Screwed Up Again When Handing Candidate Petitions for the 2022 Election

When a candidate pulls a petition it is signed and dated, and when they turn it back in with their signatures it is signed and dated. Well, at least one candidate, Brett Lashlee, had his petition signed as "issued" during a public meeting after a concerned citizen pointed it out to the new Administrator. This, I am sure, was an honest mistake. However that process is there for a reason, and improper documentation could cast serious doubt on an election--all things considered. 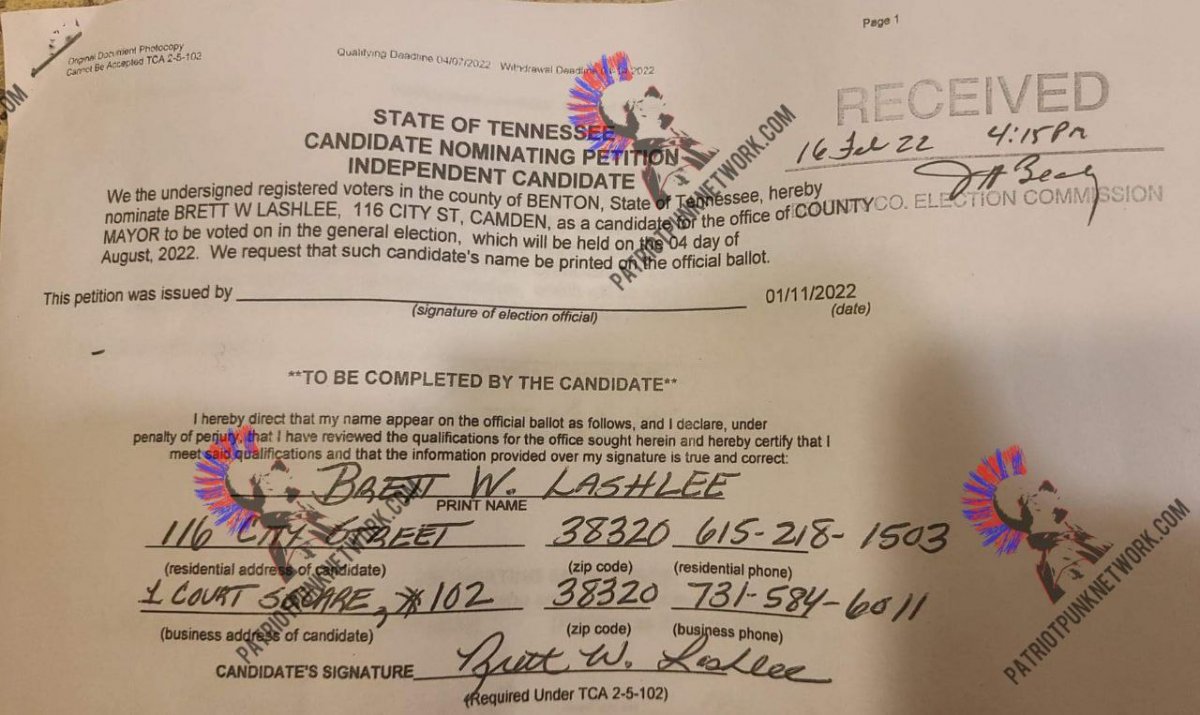 9. Hired New Poll Workers During the 1st Public Meeting Not Announced in Newspaper; Some Even Mocked the Citizens who were not present.

As stated earlier, the Benton County Election Commission made the decision to stop publishing the meeting information in the local paper. In one of the first meetings after making that decision, when very few people, if any, knew where to look for the public notices, the commission hired a bunch of poll workers. They made the statement that many of the applicants were new registered voters and they were hired without the usual citizen oversight, because none of the "regulars" knew the meeting was taking place. During the meetings several of the commissioners make a comment about the attendance, and even joke about how peaceful it was. Ironic after reading number 3, if you ask me. You can watch that livestream here. 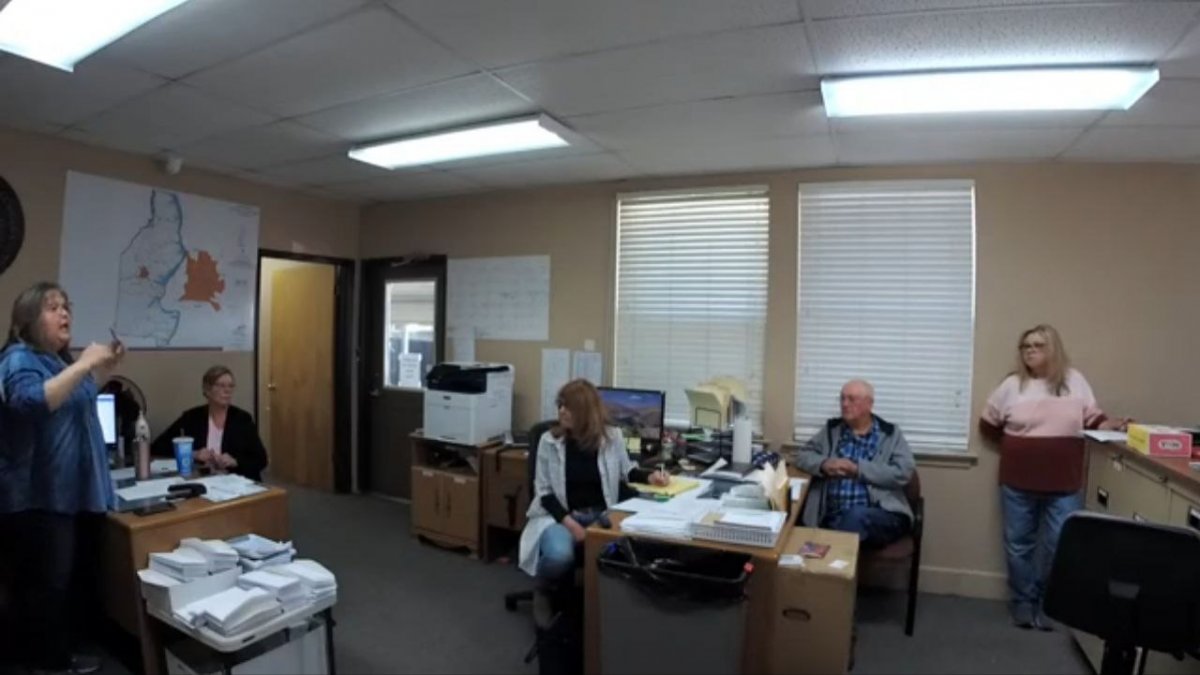 10. Failed to Publish the Sample Ballot in the Paper 5 Days Before Early Voting

TCA 2-5-211(b) states that the Election Commission SHALL publish a complete sample ballot in a circulated paper at least 5 days prior to the beginning of Early Voting, or they can mail every address with a registered voter a sample ballot. In this case, no sample ballot was mailed. Early voting for the Local General Election and State Primary began on July 15, 2022, meaning the Commission, by law, would need to publish the Sample Ballot in the paper no later than July 10, 2022. They did publish the sample ballot in the paper which is dated July 14, 2022 and the paper was released a day early on July 13, 2022. This is 2 days prior to an election and not 5. This would really be a petty "screw up" if that was the only issue, but as you will see in number 11, this is not the only issue involving the Sample Ballots. 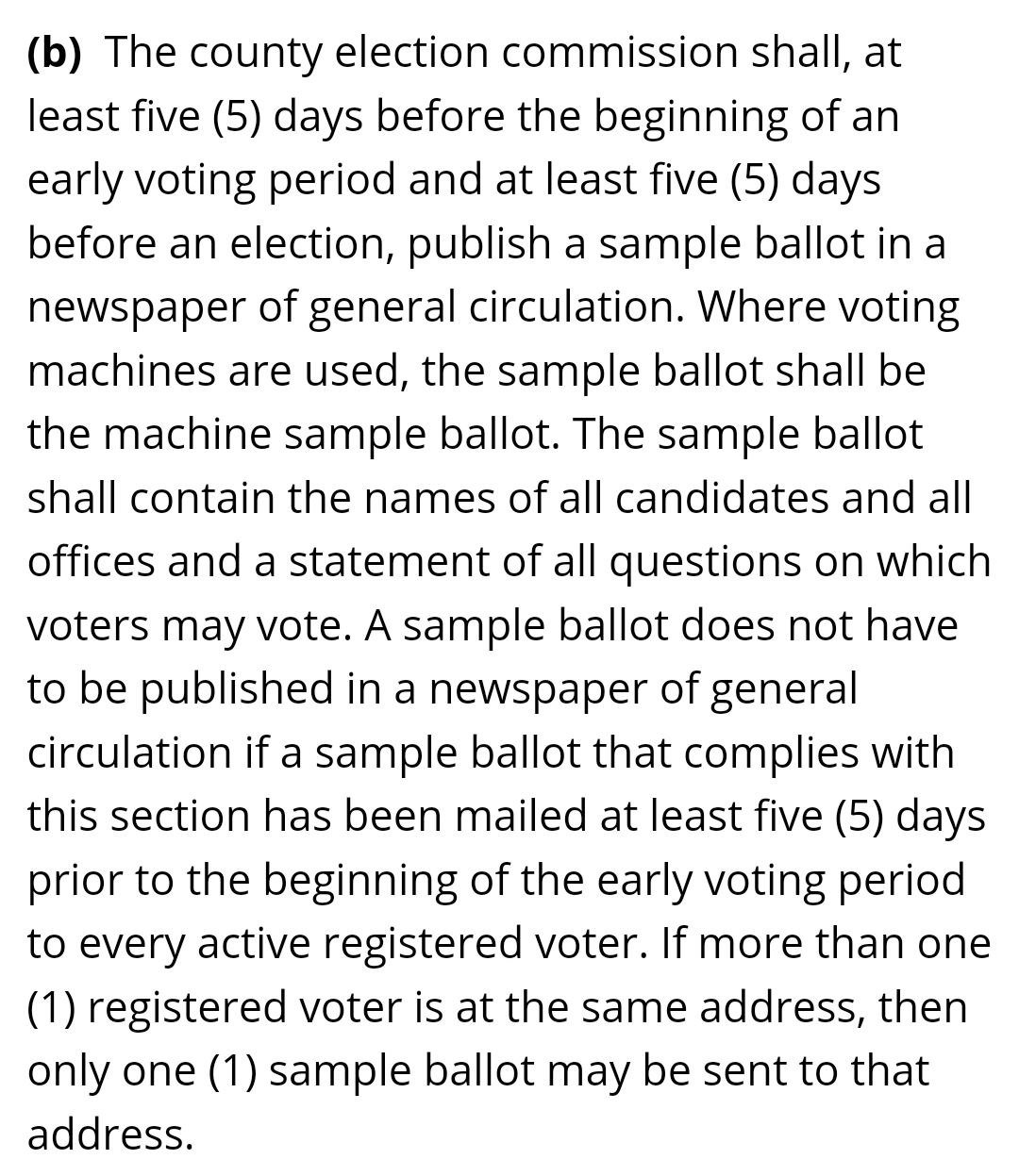 11. Numerous Serious Errors in the Sample Ballots were not caught until 2 Days Prior to the Election

As we learned in Number 10, the Benton County, TN Election Commission missed the deadline to publish the sample ballot in the newspaper. However, when the sample ballot was eventually published there were numerous serious errors. 3 candidates had their party affiliation mislabeled and 2 races were not even on the ballot.  Now, 2 of of the candidates that were mislabeled were mislabeled by the newspaper themselves, and they appropriately took credit for this mistake (Picture A Below) in the next-day's special edition of the paper, which was released just 1 day before Early Voting. However, there were several other issues. School Board Candidate for District 6 was incorrectly labeled as an "Independent Candidate".  (Picture B)
But wait! There's more! None of the United States Congressional Candidates were on the Sample Ballot Published in the original paper, and that race had to be republished in the Special Edition of The Camden Chronicle. As you can tell by Picture C below, at of the time of publication this the online Sample Ballot available at BentonCoTNElections.com was still missing the United States Congressional Primary Races for the 7th & 8th Districts. Most of Benton County resides in the 7th District, but a small portion of the of the county live in the 8th US Congressional District.
No matter who made this error, someone in the Election Commission should have caught it prior to sending the ballot to the paper. Maybe if they had operated on-time and in accordance with TCA 2-5-211(b) they would have had more time to catch and correct these issues.

a. CAMDEN CHRONICLE CLAIMING CREDIT FOR 2 OF THE MANY ERRORS WITH THE SAMPLE BALLOT 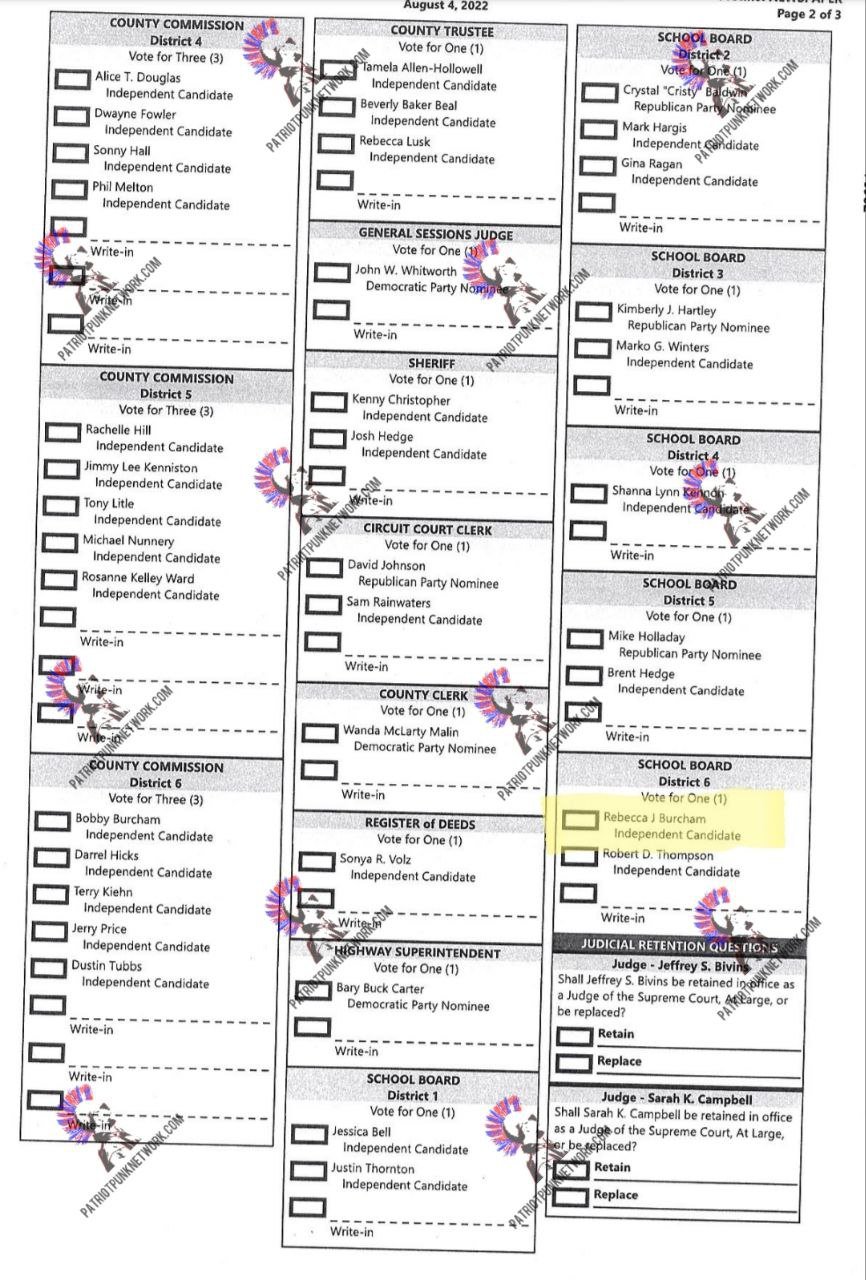 b. SAMPLE BALLOT EMAILED BY ELECTION COMMISSION WITH INCORRECT PARTY AFFILIATION FOR REBECCA BURCHAM. SHE SHOULD BE LISTED AS A REPUBLICAN 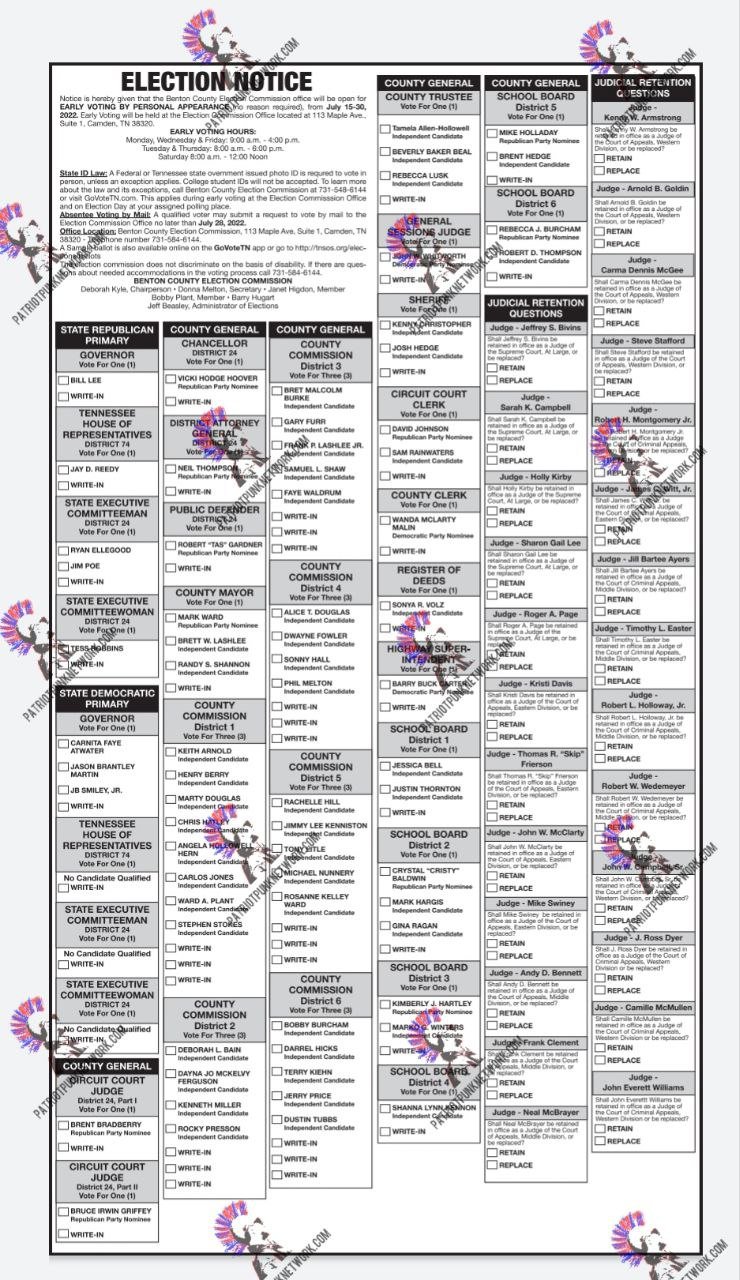 It is unfortunate that the people of Benton County, TN are having to deal with this utter mess masquerading as an Election Commission. However, this is what happens when state bodies replace an experienced Election Commission and Administrator with all new people who have never ran an election before. This list is by no means intended to be comprehensive, and there are numerous rumors of other serious issues floating around on the internet that have yet to be verified. If you have experienced anything unusual or concerning with the Benton County Election Commission, or if similar issues are plaguing your county, I want to hear from you. Please reach out to me via email at Tips@PatriotPunkNetwork.com & be sure to include any supporting evidence of your claims.