CHASE MATHESON - JANUARY 17, 2022
MCMINN COUNTY, TN -  Tennessee Woman Indicted with 18 Counts Aggravated Statutory Rape, Patronizing Prostitution & More A Melissa Blair of Englewood, TN has been charged with 25 Felonies, most involving sexual misconduct including over a dozen counts of Aggravated Statutory Rape. We were first made aware of the situation by a concerned parent about a week ago who says their child was charged with possession of a contraband and when questioned, the child stated they received the contraband from Mrs. Blair. The parent began investigating uncovered some disturbing allegations against Mrs. Blair, who to our knowledge is not affiliated with the school system. This occurred in October 2021. The tip was reported to DCS and then to the Sheriffs office in December according to a press announcement. We are unsure if this parent was the one who alerted law enforcement to the situation.

Allegations are that Mrs. Blair was buying controlled substances and soliciting sex from high school males. To be clear, it is our understanding Mrs. Blair is not involved in anyway with the McMinn County School System, however an inside source from the School System has stated that as many as 20-30 students could have been involved, although current charges are only surrounding 9 confirmed victims. The McMinn County Sheriff did not return my request for comment last week, but finally held a press conference. All accused are presumed innocent until proven guilty in the court of law. List of Charges: Aggravated Statutory Rape x 18
Counts Patronizing Prostitution x 4
Counts Forfeiture of Personal Property x 1
Count Aggravated Statutory Rape x 1 Count (appears to be in addition to the 18 others)
Solicitation of Person Under 18 x 1 Count 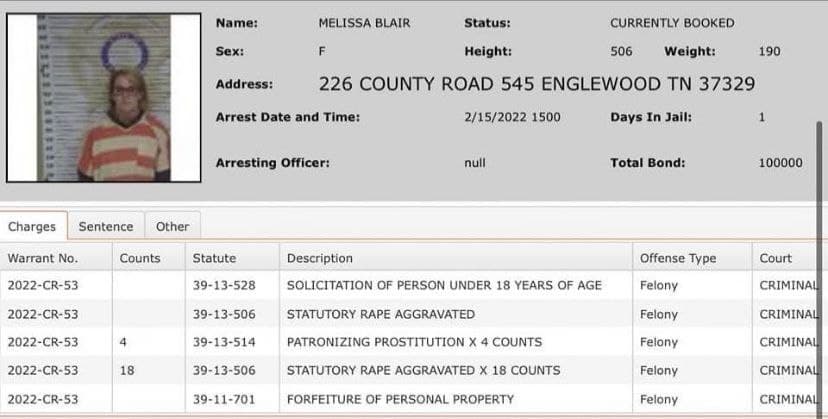